This is how one community in remote Ecuador defends its territory

Reposting an article from David Hill, a journalist from the Guardian, writing about the A’i Kofan from Sinangoe defending their territory from both legal and illegal miners, loggers, hunters, fishermen and assorted others actually invading Sinangoe land. 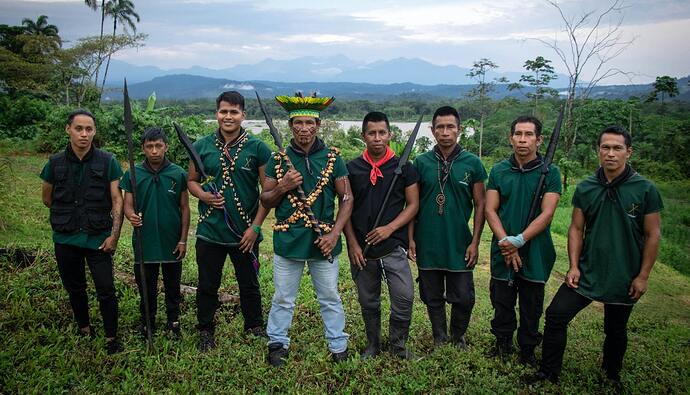 “I am a young Indigenous land defender and filmmaker,” Narvaez’s statement ran. “I was born in the A’i Kofan community of Sinangoe, where I live surrounded by nature and where the majestic Aguarico River is born. . . My dream is for my people to live in peace like our ancestors once did. We know that the forest and rivers are essential for our survival as humans. . . Guided by the wisdom of our elders and the forest, we continue to unite and fight.”

Narvaez’s statement also referred to the fruits of another of Sinangoe’s strategies to defend its territory: a “historic” judge’s ruling issued in 2018 after the community, together with the national ombudsman, took legal action. That ruling found that the A’i Kofan’s rights under Ecuador’s Constitution and the International Labour Organisation’s legally-binding Convention 169 had been violated by the establishment of the mining concession we visited and many others upriver, and suspended them. After it was immediately appealed by the government, another ruling by another judge went even further and annulled the concessions altogether, thereby protecting more than 79,000 acres of rainforest from mining. The following year, Sinangoe’s case was selected by the country’s Constitutional Court as part of a process to set national jurisprudence on indigenous peoples’ rights - described by Amazon Frontlines (AF) as a “once-in-a-lifetime opportunity” with the “power to shape how long-term conservation decisions over Indigenous territories are made and halt the expansion of the extractive frontier in the Amazon and beyond.” According to AF, over the next few months the A’i Kofan, together with the Waorani and other indigenous peoples, “will be ramping up their efforts to ensure the Court rules on Indigenous people’s right to decide over their territories and launching a global digital campaign calling on the world to stand in solidarity.”

Link: This is how one community in remote Ecuador defends its territory - David Hill